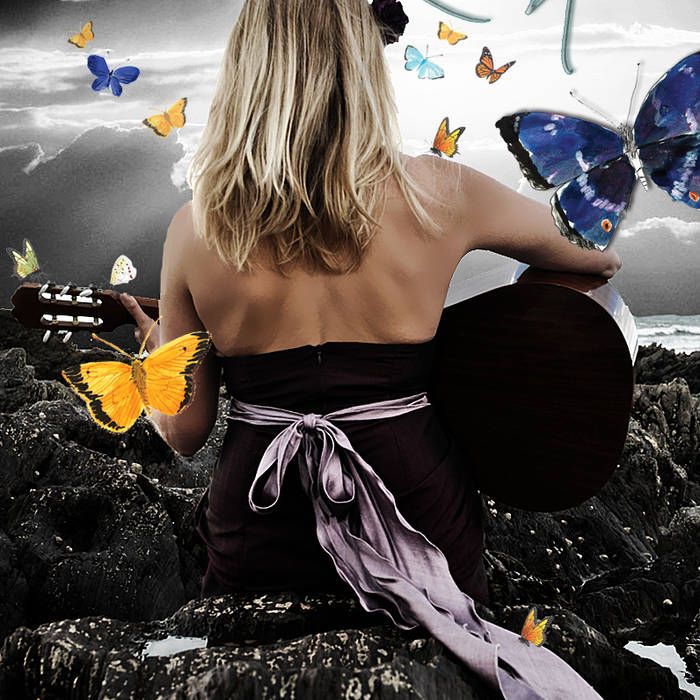 Sarah Semyanik French Exchange is a melodic masterpiece, a collection of personal stories told with great artistry and precision. It's perfect Sunday afternoon reverie and a guided journey into rare and unique musical landscapes. I love it. Favorite track: Circles.

Born in London, with life excursions in Israel and France, Noëlle began her musical education singing harmonies with her younger sister and creating cacophonies with her siblings in the kitchen utensil orchestra.

Since those early days Noëlle has studied jazz performance at the prestigious Rimon School of Jazz and contemporary music in Tel Aviv, winning a bursary at the end of her first year and performing at the IASJ before legendary jazz saxophonist and composer, Dave Leibman. Returning to England, she gained 1st class hons in Music at Dartington College of Arts and began performing with various jazz ensembles as a vocalist and improviser.

“French Exchange” is Noëlle’s debut album of original songs, written, arranged, recorded, mixed and produced by her over a six year period, in four different homes and two countries. It is a beautiful body of work exploring her experiences and relationships leading up to and during her life in rural France.

Since the release of “French Exchange”, Noëlle has performed live sessions for BBC Introducing in Devon and Balcony TV Exeter, has guested on Soundart Radio and has begun touring with her band, Noëlle et les Papillons, featuring up to nine musicians. Noëlle was also long-listed to play on the BBC Introducing Stage at Cheltenham Jazz Festival, 2016, curated by Jamie Cullum.

Some feedback so far…
“Saturday night, James Santer, BBC Introducing in Devon, two hours of the finest local music from this fair county.

Wow, looking down the list again some brilliant bands to kick us off tonight, really, really are a little bit later on. Some nice little acoustic tunes winding our way down to one of the most sublime, professional, polished sessions we’ve had in a very long time on the show tonight. Noëlle Rollings will be in the house with a, just gorgeous, gorgeous session, stay tuned for that.”

Later he introduces the session:
“First discovered, a young lady called Noëlle Rollings on, I think a first play show in January this year and her album “French Exchange”, which is so eclectic, so different, each and every track that I’ve played for you so far, I just had to invite Noëlle in for a live session.

“French Exchange has all the advantages and none of the pitfalls of eclecticism. Noëlle Rollings clearly has curious ears. There are a lot of interesting influences here, but over a period of around fourteen years she allowed them all to fall into the same alchemical vessel and come out as her own brand of gold. I first knew her as a jazz singer, and that still might be felt to be her foundation. But her strong artistic identity and range of references takes us way beyond jazz into the fascinating world of her own songs and arrangements. Well worth repeated plays.” ALBUM REVIEW by SAM RICHARDS, Soundart Radio, 2015

An adventurous soul, I re-work my observations and experiences into songs and soundscapes. After performing on Jazz circuits abroad and at home for many years, I have finally created my first original body of music, French Exchange.

Track Name: The Secret
How do you sleep, keeping the thoughts that you keep?
And how do you stand, when you’ve two feet off the ground?
How can you see, when you never look at me?
And how can you grin, when you’ve no good thoughts…

Within you you’re guarding a secret you cannot expose,
Though you know that you want to
And hiding it deeply you’re thinking that nobody knows
But I do.

Within you you’re guarding a secret you cannot expose,
Though you know that you want to
And hiding it deeply you’re thinking that nobody knows
But I do.

Why can’t you speak, to me telling the thoughts that you keep?
And why does it seem, that you’re living some kind of bad dream?
Why don’t you take, a hold of the love that’s at stake?
And why must I stay, outside when I should be…

Within you you’re guarding a secret you cannot expose,
Though you know that you want to
And hiding it deeply you’re thinking that nobody knows
But I do.
Track Name: Window Box
Happy is the girl, who walks alone
In sun and wind and rain with a carefree refrain.

She doesn’t miss the hand she used to hold
But manages to find,
A tranquil state of mind.

(Sowing seeds, planting bulbs and turning earth, she is growing
Lifting weeds and feeding soil and spreading love in her window box).

Distant is the boy, who stares outside
Imagining her smile that evades him for a while.

He tells himself he’s fine without her heart
But secretly he craves the love he’s felt in waves.

My girl’s heading out today
It is her intention, no longer to stay
‘Cause the timing is right for her world to ignite from this day (now is the time)
And the city awaits as she steps through its gates,
She’s ok.

My girl’s stepping through the door
With her plans and her dreams and her hopes and much more.
She is taking a chance on this life of romance, that’s for sure (now is the time)
With my blessing she’s gone, she’s the one that I’ll always adore

Far…the change came when I knew it would,
When I stood my ground for all those things that I believed in.

He was confused and sad and lost.
That smile disappeared for a while.

You dress,
How you aim to impress
But you don’t say anything new at all.

You feed me the same old score as you’re walking out the door
But it’s what you hide I can’t ignore.

Every time you try to undermine my fears
The truth gets louder in my ears
I’m no longer here.

You strut,
And you act like a slut with every
Man and woman you meet
But you don’t say anything new at all.

You fake
Every smile you make
And you ain’t saying anything new at all.

You feed me the same old score as I’m walking out the door
But it’s what you hide I can’t ignore.

Every time you try to undermine my fears
The truth gets louder in my ears
I’m no longer here.

No, I no longer hear your talk
Or the way you walk
‘Cause you don’t say anything new at all.
Track Name: Boy When You Love
Hey little boy, your honesty’s shining right through you
And I know that this blow is the toughest you’ve ever endured.

You’ve suddenly seen a truth that is hard to imagine.
The perfection is floating away to reveal that it’s flawed.

Making mistakes is a hazard of day to day living (everybody makes mistakes),
But standing alone and admitting you’ve wronged is quite brave.

Don’t hide away from the people around you who love you.
Learn to forgive her but don’t let your love be her slave.

And boy when you love you surrender in full,
Believing she’s saving it all just for you,
But from a safe distance, your heartstrings she’ll pull ‘til they break.

And she doesn’t understand why she’s to blame.
Why can’t you continue to love her the same?
In your innocent way she expects you to stay in love.

And she doesn’t understand why she’s to blame.
Why can’t you continue to love her the same?
In your innocent way she expects you to stay in love.

And if you are late
Don’t believe that I won’t wait.

I will be around for you
When the day begins
And when the night
Shines on
The town below
You will know that I am waiting,
I am waiting
For you.

For
Even when you do not come
I’ll be sitting waiting ‘til
The moon
It waxes and it wanes
And soon
The birds begin their chatter
But no matter
I’ll be waiting true for you.

And when we are there we will be together,
Together

I can feel a gentle breeze so keep blowing
And warmth around my knees just keep blowing.
Track Name: Long Lost Friend
Why should it be that you must underestimate me?
I can’t see but I feel.

And how does the bird fly so high
Without ever touching the sky?

And how will we fend?
When will we tend,
My long lost friend?

Why do I feel like I want to cry
When you pass me by?

Andy when does the rain
Intend to stay home again?

And how will we fend?
When will we tend to each other, forever and ever,
My long lost friend?

I’m on my French Exchange,
The teacher’s left, there’s no one to explain
But I’ll get by, I always do,
Examining the difference between the vous et tu.

I've loved and I lost the same as you
So you see I know just what you've been through
And if you let me, here's what I'll do
I'll take care of you

So darling tell me that you'll be true
There's no doubt in my mind, I know what I want to do
And then just as sure as one and one is two
I know I'll take care of you

And I could hear you cry
Could you hear me cry?


There were phases as you grew, like Picasso’s shades of blue,
Didn’t matter what we said or what we’d do.
So infectious was your charm, it would get us every time,
Sharing laughter was the only way to go.

And you can hear me cry –
El Toro!

A renegade in school, not accepting any fool, who should
Bend the truth or strut about the place.
Gaining kudos from your peers, you were
Wise beyond your years but your
Innocence illuminates your face.

Bandcamp Daily  your guide to the world of Bandcamp

Featuring Oakland sounds from the Smart Bomb collective and Samplelov.